It’s been another week of interesting releases from established artists with really good returns from The Internet, Thundercat and Mogwai sitting alongside some not so good stuff from Jason Mraz (who just continues to get cringier by the release – and this from a man who wanted to call his last album ‘Peace Canoe’) and frankly horrifying stuff from Kanye West (“poopity scoop”?!!).

But in the world of the slightly less-well-known, things have been incredibly solid. As late as this morning, there were two options for four out of the five categories.

I’m delighted to say that, for the first time in a long time, a metal track is my Charm Offensive and my Quiet Riot comes from a man in a woman’s white fur coat (I certainly hope that’s not for the last time, though).

See what catches your ears… 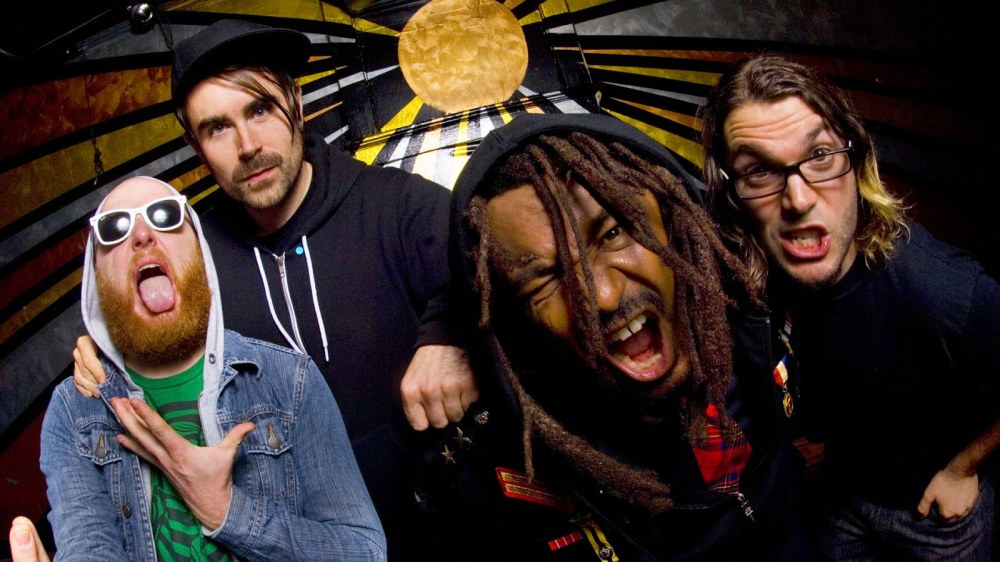 What I Know:
Welsh reggae-rockers Skindred were formed from the ashes of the band Dub War in 1998 and have released six albums since. A fan since the beginning (a reflection of my young love for nu-metal), I’ve always been slightly baffled by the fact that, though they’ve always been popular within the metal scene, Skindred never really appear to broken into popular consciousness.

Perhaps that will change with new album, ‘Big Tings’. Or perhaps they’ll continue to be metal’s favourite secret. Either way, I’m happy.

What I Like:
If I could have waxed lyrical about Skindred on this blog when I first heard the rock / drum n bass / reggae cross-over masterpiece that is Selector on their 2002 album Babylon, I would have done. But this blog didn’t exist then. If I could have told you how much I loved their sampling of Delia Smith’s infamous Norwich City ‘Let’s be ‘aving you!’ speech on 2015’s Volume on this blog, I would have done that too. But 45rpm still exist at that point. There are countless other points in between in which I yearned to tell someone – anyone – how wonderful, brutal, hilarious and unique this band is. But I didn’t have a vehicle for it.

Now I do. And so I will finally take my opportunity to declare my devotion for Newport’s finest, not simply because of the long-standing love affair I have with the boyos, but because I genuinely believe that That’s My Jam is as infectious and riotous and plain bloody brilliant as anything they’ve done to date.

What I especially love is the new-found light-heartedness in the lyrics on this track. Sure, Skindred have always had music that made you smile but, so often in the past, that was the backdrop to lyrics that spoke about Pressure, needing to Kill the Power or being Under Attack. To be clear – there’s nothing wrong with that, but That’s My Jam seems to meld together like never before the feelgood ‘Woop woop’ sing-along with the “dramatic, erratic” vocal delivery from Benji Webb on the third verse and, finally, a lyric that can kick off your weekend’s good vibes.

I’m more than happy to admit to being a “freak for the rhythm and slave to the jam” – especially when those beautiful chords underpin the second chorus, second time around.

That’s My Jam comes from the album ‘Big Tings’ which was released last week.

What I Know:
Andy Mineo is a New York rapper, producer, director, presenter, comedian and self-styled “social media juggernaut”. Oh, and he also happens to be a big fan of the ‘Big Man’, though he shies away from the label “Christian rapper” because apparently he feels it turns some people off.

What I Like:
I gotta be honest, while in no way turned off by Mineo’s religious leanings, I simply don’t expect anything this wonderfully ugly to come from such a virtuous source… and, let’s be clear, despite spurning the label, there’s no denying Mineo’s lyrics make plenty of references to his faith.

This track is so dirty, so in your face and so cocky you wonder whether the big man is really totally approving of it or whether he’d really rather we were all still listening to the Carpenters and advocating free love.

“I don’t need opinions… I did this for myself” says Mineo straight off the bat. And that’s borne out in every element of I Ain’t Done’s production, from the abrasive guitars to the distorted vocals to the heavier-than-heaven bass line.

At one point Mineo references Kanye and what’s interesting is that his Yeezus record was my most prominent touchpoint. I love Yeezus, precisely because it’s not an easy listen and, while I Ain’t Done doesn’t take as many sonic leaps as most of the material on West’s 2013 classic, the palate of the two records is uncannily similar. (Interesting side point; while West is often derided for being ‘preachy’, I suppose Mineo is quite literally preaching here and probably proud of it).

The only slight mis-fire for me is in the kinda weak and over-long outro but I suppose I can’t praise someone for taking risks then criticize them when they do something I don’t like.

I Ain’t Done comes from the album ‘I: The Arrow’, which was released last week.

Like this? Try these:
– Kanye West: On Sight
– Saul Williams: Coded Language
– Run the Jewels: Talk to Me

What I Know:
Lewisham’s own Paul White is best known for his work with Detroit rapper, Danny Brown but has also quietly developed a reputation for himself as one of the most eclectic and eccentric-sounding producers on the circuit having also worked with the likes of Homeboy Sandman (who’s single #NeverUseTheInternetAgain was reviewed on last week’s entry), Jamie Woon and Charli XCX.

What I Like:
On his own album, ‘Rejuvenate’, White has taken a much quieter, more cerebral, but no less exciting approach to his work, and this is no better displayed than on Set the Tone.

The track kicks off with a straightened, pseudo-swing drum beat that reminds me of a track called Equation by an artist called Equal I, which for the life of me I can’t find online so you’ll either have to trust me or hunt down Talvin Singh’s wonderful ‘Anokha’ compilation album to hear.

Then, in comes Denai Moore’s silky voice. The sometime SBTRKT collaborator delivers an effortless vocal which, according to White, “is about letting go to let something else in, opening up a new, limitless open space and flowing with it”… so take from that what you will.

All the while, the atmospherics are building around Moore’s central point without ever becoming intrusive or distracting. It is the sign of a true master of his art that such a rich and enchanting sonic landscape is able to wash over you while you follow the vocal. 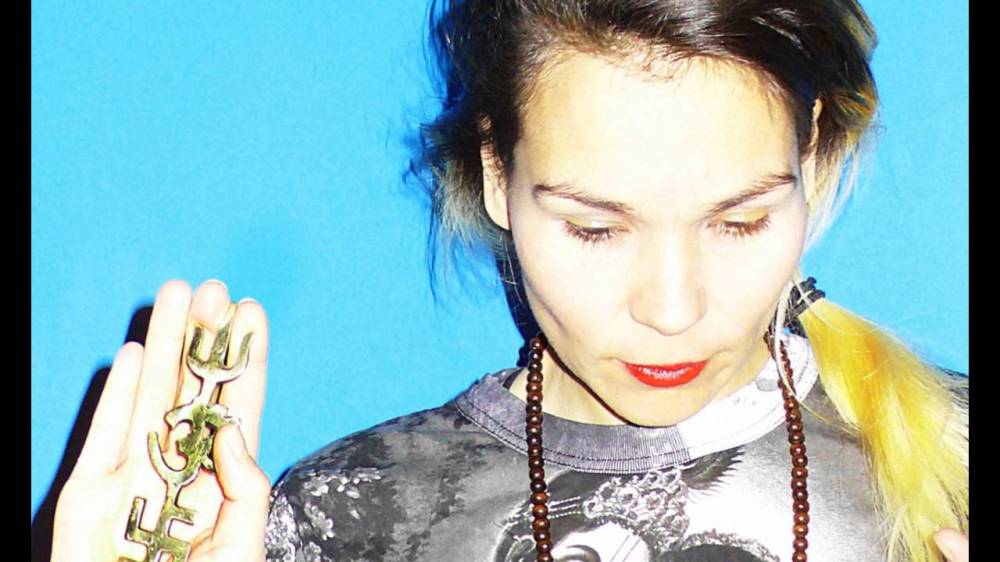 What I Know:
Hands up who would be surprised if (having listened to this track by an artist with this name) I was to tell you that Aïsha Devi is pale skinned and from Switzerland? Believe me, I would be joining you right now but it’s a little hard to type with your arms in the air.

This is because Devi is actually the artist Kate Wax, post-seismic-awakening brought about by – amongst other things – her discovery of meditation and a journey, both physical and spiritual, that took in a complex familial network that has roots in Tunisia, Tibet and India.

What I Like:
Light Luxury is a track written in its creator’s image; complex and challenging but also, in many ways, serene.

Listen on headphones and the first thing to get your attention (because it’ll make you jump out of your skin!) will be the violent bass and drum stabs, which bring to mind the claustrophobia and terror of Celestial Trax or The Haxan Cloak.

However, as is so often the case on Devi’s music, her vocals add a sublime quality to the music. A classically-trained soprano, she is so versatile that she’s even been known to emulate Tibetan throat singing (Throat Dub) in the past and Light Luxury is no exception.

From the opening vocal harmonies which are strangely reminiscent of the sound of Le Mystere des Voix Bulgares, to the artificially pitched-up vocals that could be taken direct from Aphex Twin’s Windowlicker, the song is an experiment in what the human voice is capable of (with a bit of electronic help). Later, her Indian scales – against such a powerful EDM backdrop – bring to mind Shahin Badar’s iconic vocal melodies on The Prodigy’s Smack My Bitch Up.

And it doesn’t stop there; our trip around the world in two-and-a-half minutes is completed when a synthetically-produced koto helps round out the track.

Is it world music? Is it EDM? Is it ambient? I’m not really sure. But I do know its captivating.

Light Luxury comes from the album DNA Feelings, which will be released on 11th May via Houndstooth.

5. The ‘Quiet Riot’ – Parker Gispert: ‘Through the Canvas’

What I Know:
Parker Gispert is the frontman from garage rock band, The Whigs. He’s also a cool motherfudger. The sort of cool motherfudger that can pull off clothing such as a silver sparkly number as on the front cover of this single. But books should not, I’m reliably informed, be judged on the basis of their exterior. And such is the case with this, the first solo effort from Gispert, which very much proves that you don’t have to glitter to be gold… but it’s bloody nice if you can do that too.

What I Like:
Here’s the thing about ballady-type music. There’s a bit of a misconception that, in order to be done well, it has to be in some way… small. It has to be Joshua Radin-style intimate or Onelinedrawing-style stripped-back.

Through the Canvas was written in the middle of a massive field. Nothing about it is small or intimate or stripped-back. Everything about it feels like its author was watching clouds stretch out across an infinite, honey-coloured sky, long beautiful hair swaying in the warm Nashville breeze.

It’s the beautifully picked guitar tones. It’s strings that weave in and out of the mix. It’s syrupy vocals, made weightless by tasteful use of reverb and the sweetest falsetto you’ll hear all year.

But it’s also a lyric that contrasts the sheer scope of Gispert’s vision (quite literally hoping to “paint a world that matches his design”) with humility (as the song draws towards a close, Gispert echoes “I’m never gonna be good enough, but that’s what has made me tough”).

In summary, Through the Canvas is a wonderful, sprawling collection of contradictions; a simple ballad that feels ambitious; the story of a humble man delivered by a bloke wearing a white women’s fur coat while being fawned over by two angels.

God bless you, Parker Gispert. Now hurry up and finish the rest of the album, would you lad?

Like this? Try these:
– R.E.M.: Sweetness Follows
– Band of Horses: Detlef Schrempf
– Nirvana: All Apologies (Live)

The Outro:
And so we reach a cease-fire for this week. You can find all of the tracks reviewed above in the 45 Revolutions per Minute playlist below or click to access the 45 RPM Playlist on Spotify itself.

If you like my choices (or even if you don’t), please engage in dialogue with me @45rpm_Reviews on Twitter.

The silence is broken again next week when I’ll return with five more selections for your consideration. Until then, thank you for reading and go in peace.

This site uses Akismet to reduce spam. Learn how your comment data is processed.